27 de diciembre de 2021
Pros: Sound at the level of DAPsGreat sounding midrangeBeautiful designoutput powerIt can be used with most headphones and earphones
Cons: Hiss with sensitive iems (4.4mm output)Intimate soundstage
About me:Music lover and earphone enthusiast, most of my previous reviews are in spanish.Disclaimer: TempoTec graciously sent me the Sonata E44.Gear used:Final B3, A4000, Sonorous 3, Ath R70xAbout Tempotec:TempoTec is a company based in China conformed by a group of experts in the pursuit of "the best sound quality". You can find more here: https://www.tempotec.net/pages/about-tempotecSpecifications:DAC: DUAL CS43131SNR: 130dBTHD + N: 115dBOutput level: 4VRMSOutput power:175mW / 32ohmFrequency: 0-40KHZ / + - 0.5 DBCrosstalk: -27dBSupport: 32Bit PCM / 384kHz DSD256 (native) DSD128 (DOP)Support: HW VOLUME CONTROLSupport: PC, MAC and Android, Compatible with W7, W8, W10 and ASIO driverPackaging and accessories:
The Sonata e44 ($89) is one of the newest dongle dac/amp from tempotec, it comes in a basic packaging with no colorful or striking designs, it seems that TempoTec focuses completely on delivering products that speak by themselves and that stand out by their sound performance. Inside of the box we will find a USB type C to type A adapter, a Hi-Res sticker, a plastic protector and a 4.4mm male to 3.5mm female adapter.Unlike previous products from TempoTec, we won't find a transport case in the accessories. The current accessory set is good enough, it has all the necessary items and i wouldnt like to see an increase on price just for having more extras. 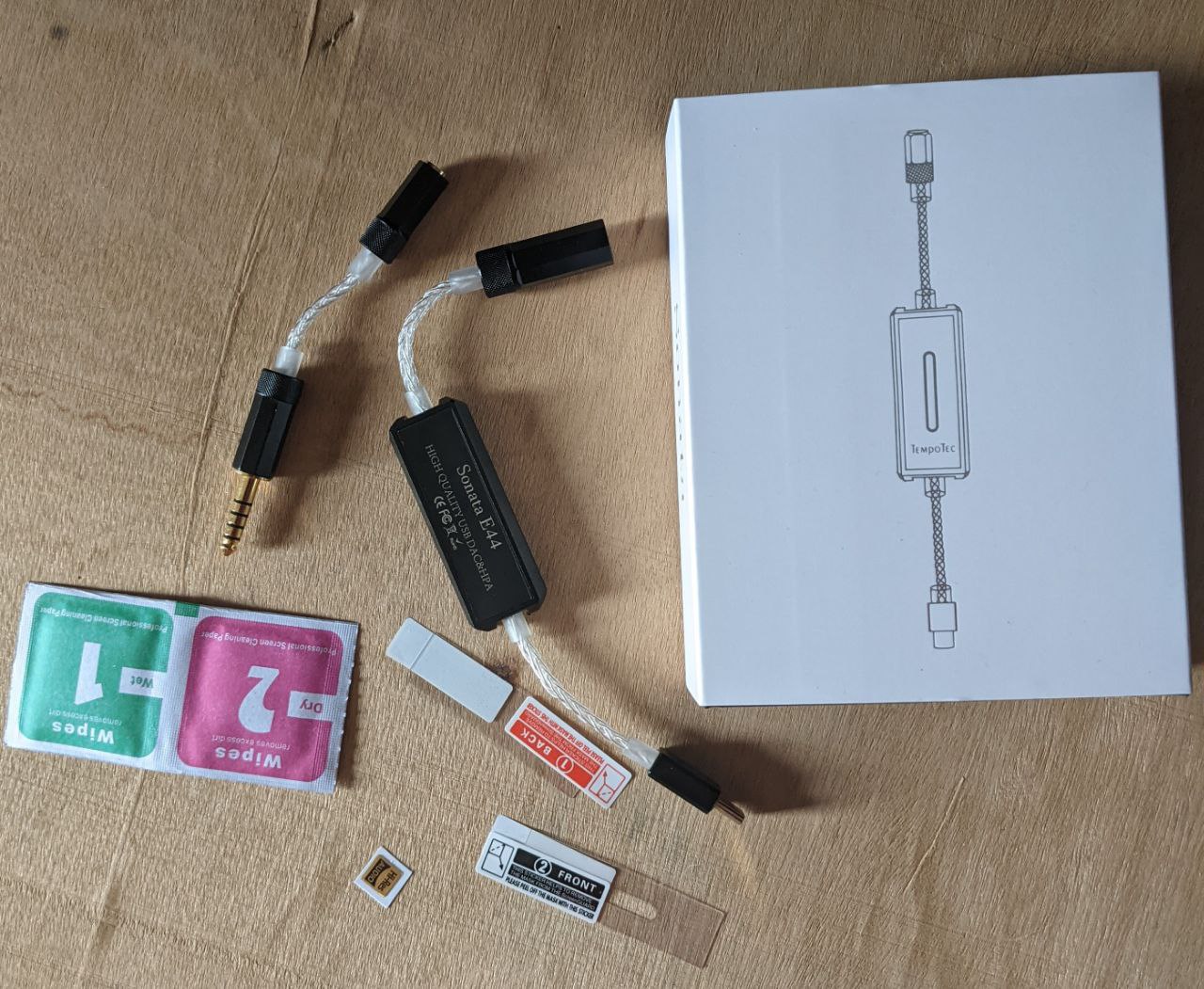 Design:
Just like the previous version, the e44 has a beautiful and stylish aluminum finish. The device feels solid and has a small size that makes it very portable and easy to carry everywhere. In the front and back faces it has a mirror-like finish that is very easy to scratch so I recommend you to use the plastic protections of the accessory set.One thing I didn't like in the Sonata e35´s design was that it looked cheap in that coffee golden colour, in this case the e44 looks completely different just by changing the main color. I really liked this combination of black tonalities that makes it look elegant and sober.The non removable cables are attached to the main unit, they feel resistant but just like all products of the same style, we don't know how much the cable is going to last. These cables have on one end the type C connection and on the other end we will find the balanced 4.4mm output. In the central part of the e44 there are 2 buttons that allow the volume control and thanks to the 32 step volume, the changes are good enough to reach comfortable levels of volume. 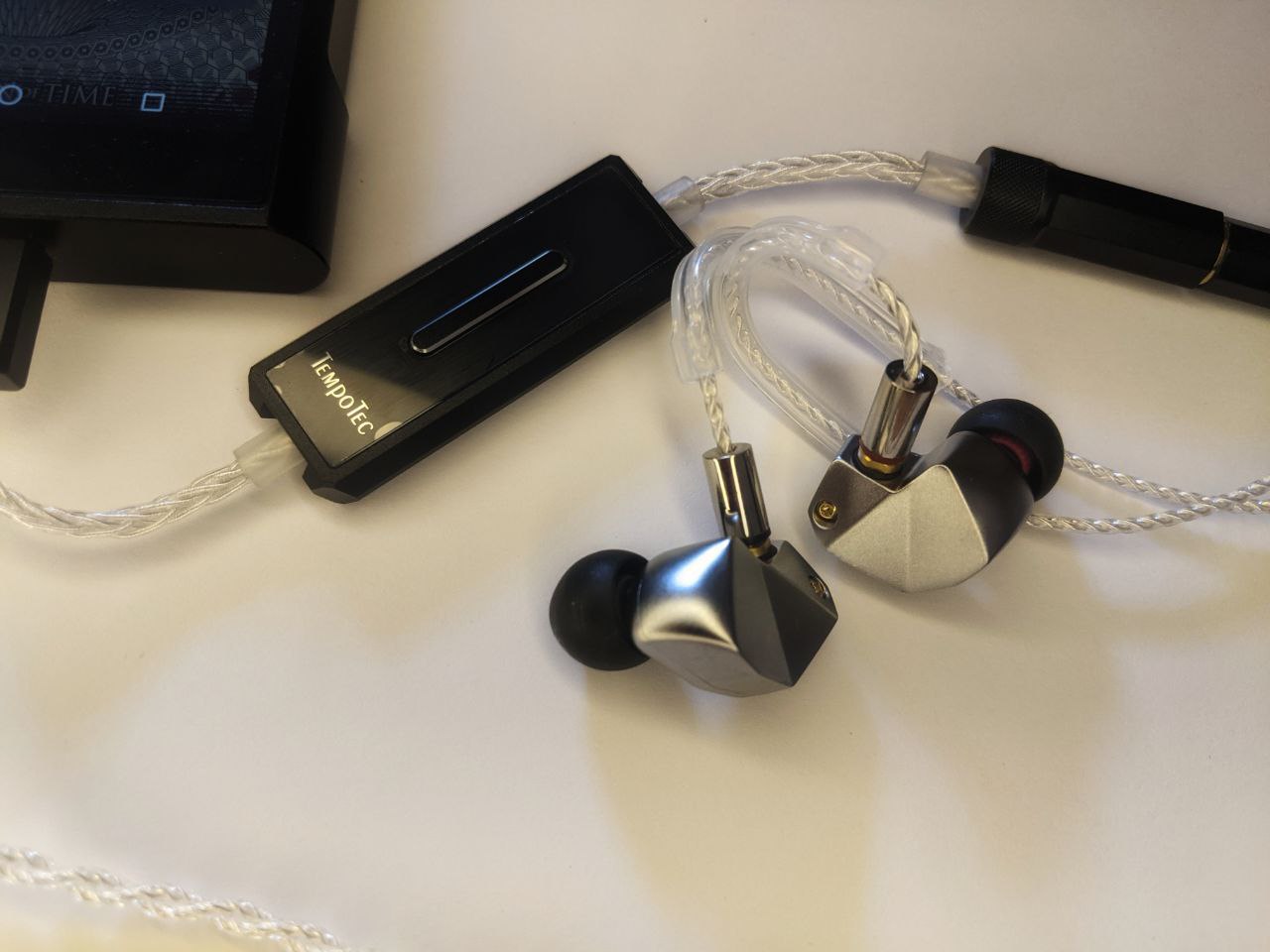 Daily use:
The Sonata e44 doesn't need special software to operate, just plug and play. In terms of heat control, this device keeps cold and it doesn't reach high temperatures but it does like energy and will drain your smartphone's battery faster than regular dongle dacs specially when using high impedance headphones. At the same time I find that the e44 has better performance by using it with computers, the bass gets tighter and the stage increases while it has more power for high impedance headphones.One thing that I liked was that no matter if I use low or high impedance headphones, the e44 delivers a solid execution in all cases. Please note that hiss/noise appears with high sensitivity iems using the 4.4mm output. 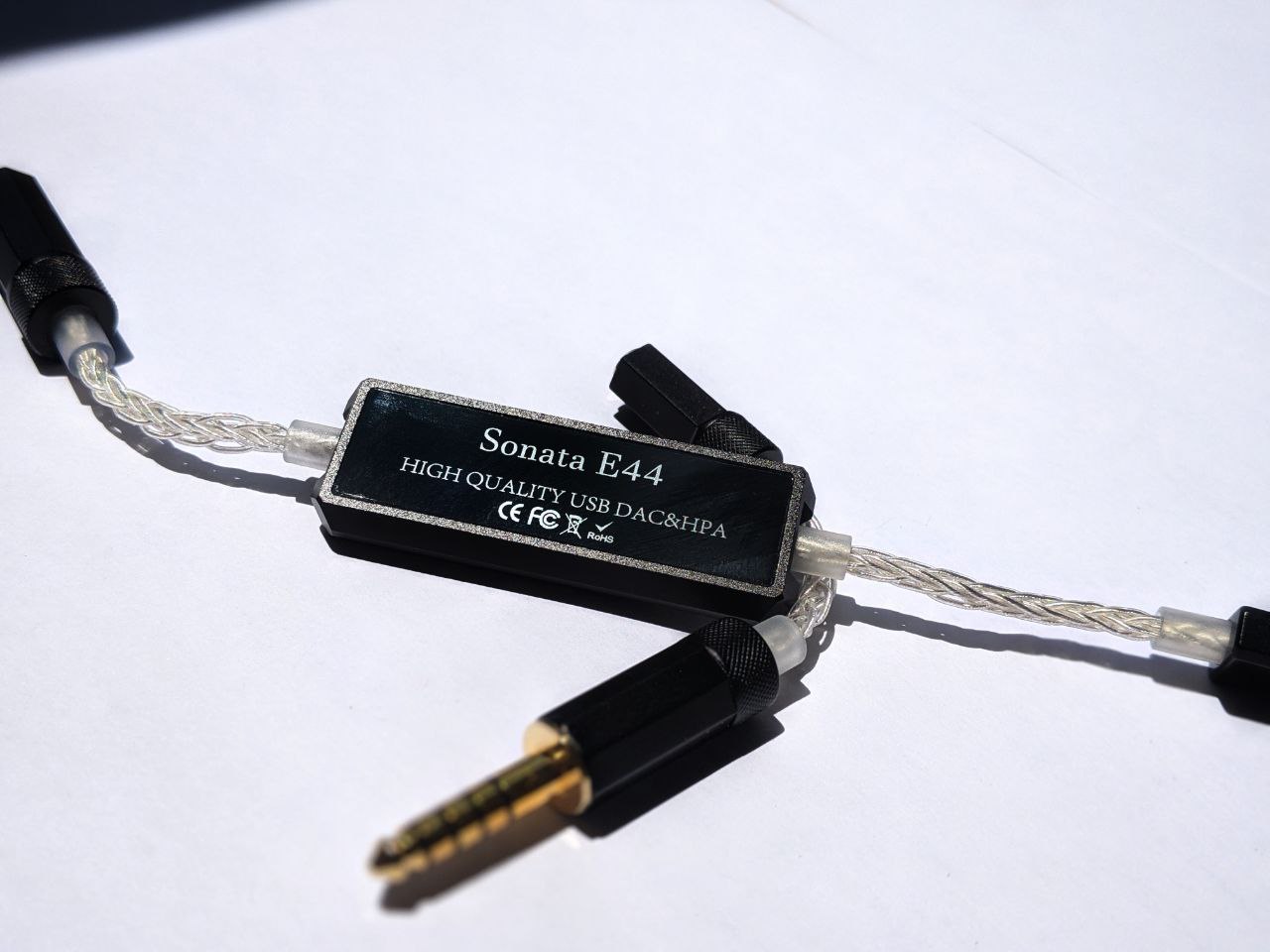 Sound
It's well known that most entry level DAPs are being surpassed in sound quality by these little devices like the sonata e44, in this case the e44 can easily match and triumph in some aspects when compared side by side to hiby r5 and shanling m3x. Before making a detailed comparison, let's start with the sound description of the sonata dac/amp.The e44 has a neutral sound reproduction with high coherency and delivering a natural tonality. Since the first time I tried this dac / amp I noted how good and balanced the sound was. Nothing was above the rest, everything sounded rich and my final b3 sounded the best it could.BassBeing a neutral sounding device gives the bass a full extension, with no added weight nor fake accentuations. Bass is fast, has a good level of detail and when it's time to hit hard it will do it but do not expect a very punchy low end specially using the 3.5mm adapter. One point to notice is that the e44 has the best performance without any adapter on it and in this case the bass sounds fuller and with better dynamics using the 4.4mm output.Mids:Here is where the e44 shows it's better capabilities by delivering a natural clean midrange with an excellent balance between the musical and analytical side. It doesn't add much coloration to the sound and the only thing i note is that the midrange sounds have more weight on it sounding fuller and richer specially vocals.In terms of soundstage i find it lacking specially using the 3.5mm adapter. Compared to daps or desktop amps the soundstage was one step below in both width and depth. On the other hand the imaging has good precision, instrumental separation is above average compared to similarly priced dongle dacs and last, the transitions have good speed reflected in songs like Design your universe pt 6 from Epica, a band that specializes in fast transitions and vocals.Highs:Treble has good clarity, once again it has a neutral representation so it won't add more coloration to this part of the sound. With bright sounding earphones like Final A4000, the e44 is able to control the very energetic highs achieving a satisfying pairing that won't sound aggressive nor lose the essence of sound of the a4000. 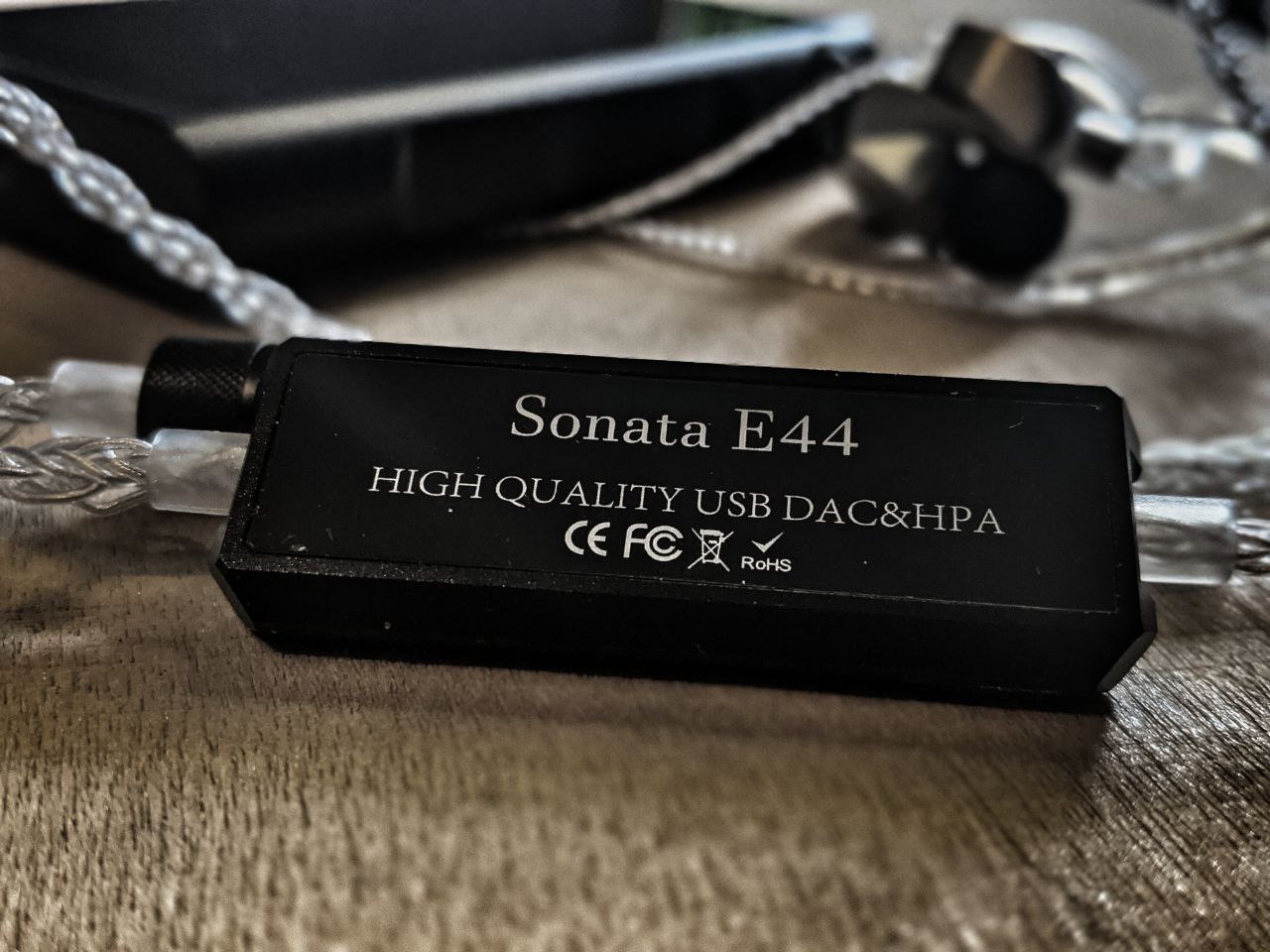 Pairings:
Final B3 (3.5mm-4.4mm): The final audio B3 is a neutral-bright sounding IEM with great clarity and excellent vocal performance. Using the e44 i experienced a very detailed treble, good layering and it never sounded thin or aggressive in highs thanks to a very well controlled and neutral treble performance of the sonata dac/amp.Pros: vocals sound clean and rich, bass is tight and very detailed, treble has good extension and without any sibilance on it.Cons: With pop, rap or electronic music, bass is very light and doesn't hit hard. This shows how true and honest the e44 is because it doesn't add more emphasis or extra bass boost.Final Sonorous 3 (3.5mm): The smooth V shaped sound signature of the final headphones is well represented, i can feel the vocals very close to me, female vocals are very enjoyable to listen to while the rest of the instruments keep back. These headphones require a good source to sound decent and the e44 delivers what they need so that's why this pairing has become my daily use equipment.Pros: excellent female vocal performance, deep layered bass,Cons: small stage and sometimes it can sound dryATH R70x: The 470 ohm impedance of this headphone might be too much for the e44 but thanks to the 4VRMS of the balanced output I achieved an excellent performance from this headphone. It is still far from desktop amps like Zen Can or Asgard 3 but the dynamism, instrumental separation, the note weight and imaging were not lacking and the results are more than good enough for a dongle dac.Pros: Good dynamics, natural soundstage, smooth and well defined treble.Cons: - 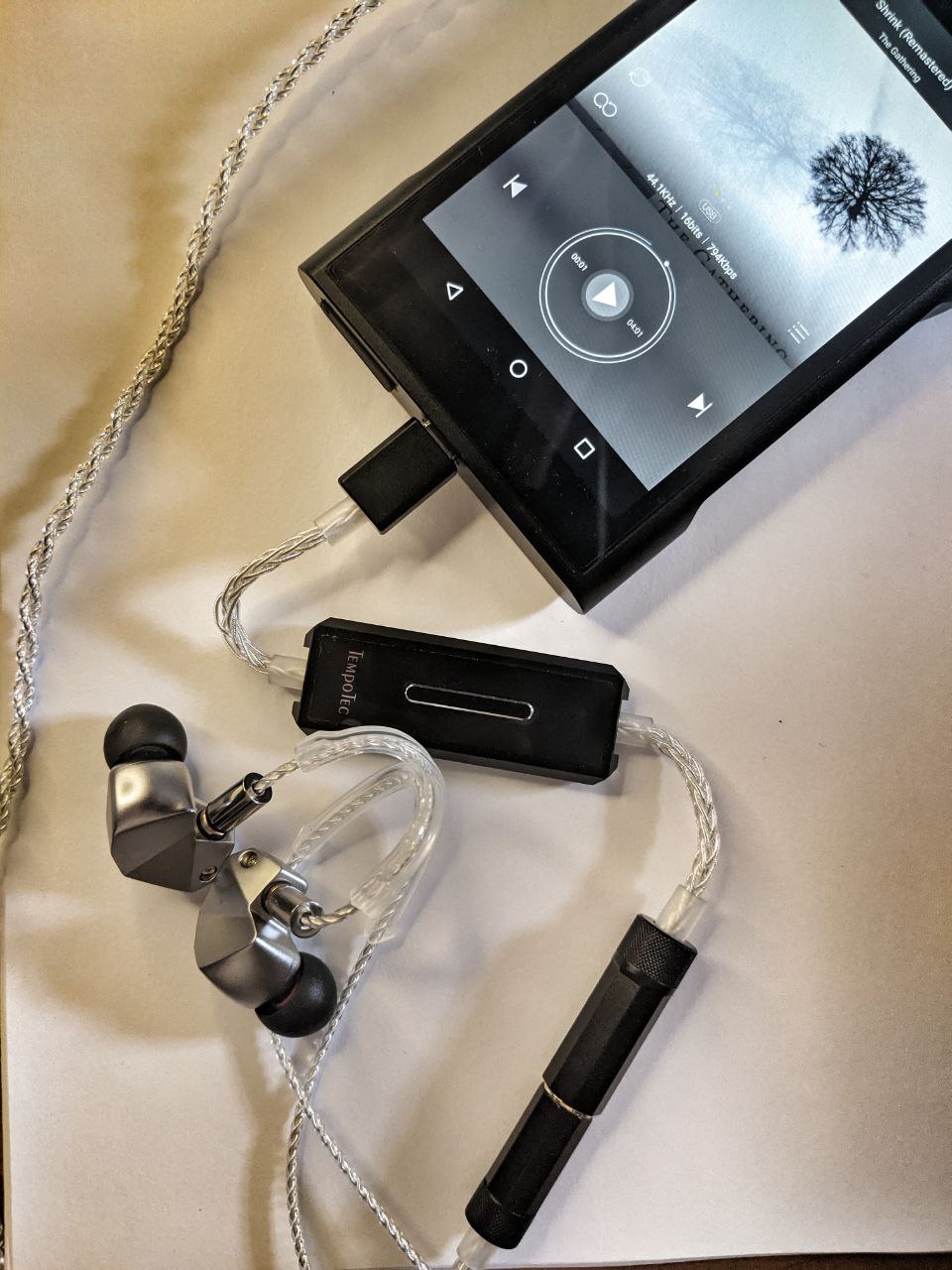 Comparisons:
Hiby R5 (3.5mm output): The hiby DAP has a warmer, softer and laid back sound when compared to the e44. One big difference is in the treble region, the r5 has an average extension and a very polite treble so it will be more forgiving with bad recordings but at the same time lacks all the detail that the e44 delivers. Bass also has more presence in the r5, it has a mid bass emphasis that delivers extra rumble and last, the midrange has better clarity and is more resolving in the e44.Shanling M3X (3.5mm output): The unbalanced output of the M3X is one of the worst that I have listened to, especially when the double dac is deactivated. It has an unnatural treble, mids have poor resolution and it's not hard to see that I prefer the e44 by a large margin. When using the 4,4mm output of the M3X the sound improves a lot: mids have better resolution, treble gets softer without losing detail and the coherency appears.If we compare the 4.4mm headphone outputs of the daps to the e44 there are not big differences. First, the hiby dap is still sounding warmer and sweeter while the m3x has better treble performance by sounding softer and with lots of detail when compared to the e44. The biggest difference is once you use full size headphones that require more amplification: the r5 is way better than the e44 in this aspect while the shanling dap is just a bit better than the sonata dac/amp.Zen dac: Due to the popularity of the zen dac i decided to compare both. The first thing I noticed was the warm and soft sound that the zen dac delivers compared to a more linear and transparent sound of the e44. A clear advantage of the zen dac over the e44 is how the soundstage is presented. In the Zen dac the stage has a 3D effect on it with great air between instruments meanwhile the e44´s stage has a more intimate representation. On the other hand, the e44 sounds more natural, has a better treble extension and a more realistic bass. 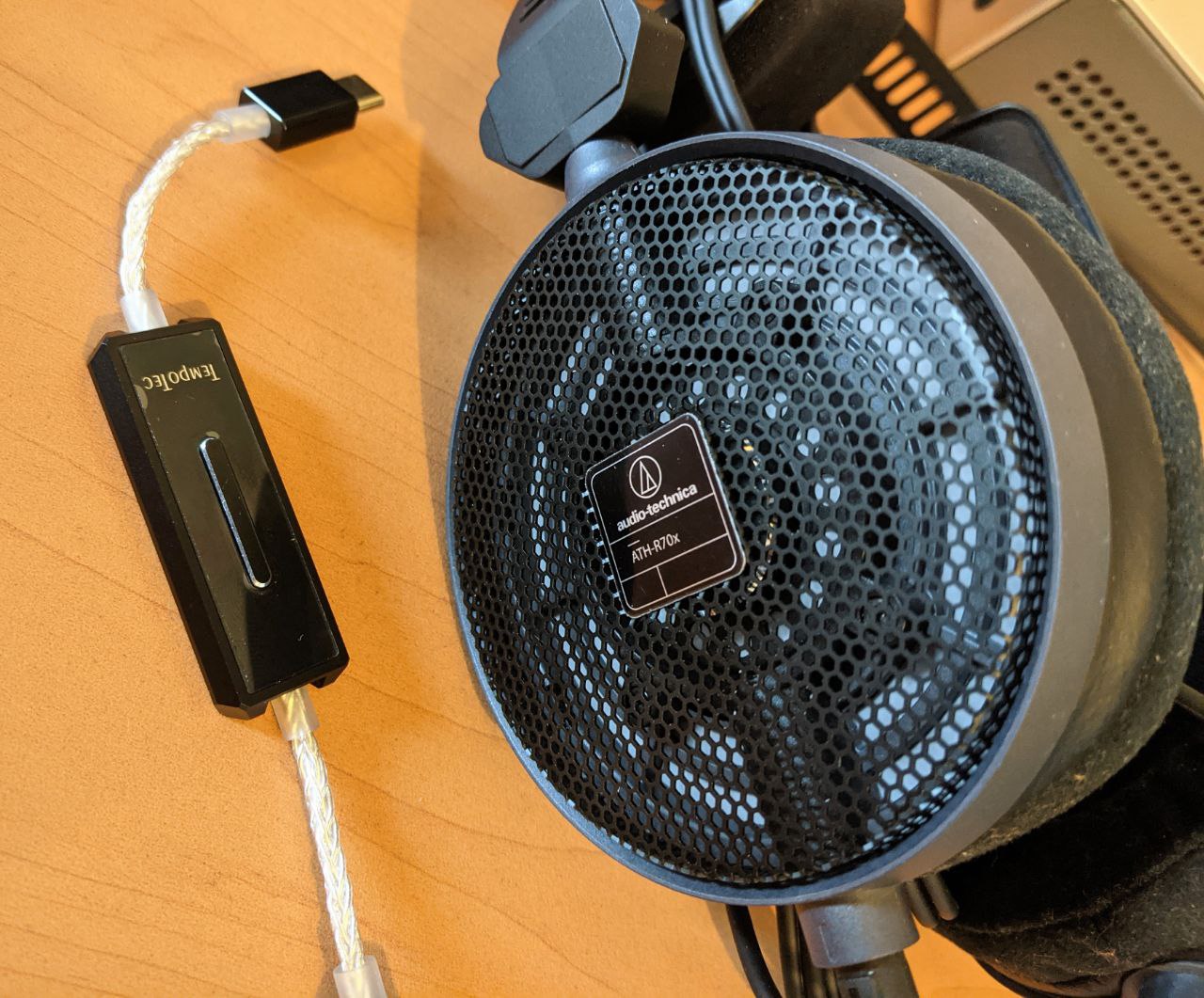 Conclusions
Every time I tried a new dongle dac/amp it was hard to distinguish between it and the rest of competitors, the performance was close and so was the sound between them. In this case the e44 has achieved a solid performance that clearly differs from the rest so i'm happy to give it 5 stars.